You Are Here: Home >> Parents >> History 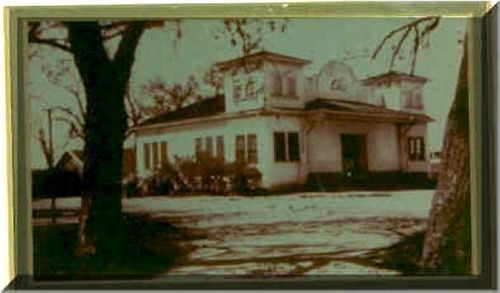 It was early spring, 1864, in the tiny tent community of Yuba City. A scattering of children wearing knickers, gaiters and flour sack chemises had assembled, lunch pails in hand. A stern-looking bespectacled teacher seated them at desks made of boards on iron stands. Another day at Franklin Elementary School had begun.

Whether Franklin held classes in Yuba City before March 1, 1864 is not a matter of official record, but the school has been operating continuously since then.

The unusually large, rough board schoolhouse first stood on the homesteaded Van Dorn property, at the southeast corner of Franklin and Township Roads. Early details are sketchy but an 1872 school census counted fifteen "scholars" attending the one room school house.

An early Sutter County newspaper reported, "The Franklin School stands well upon a good foundation and is well supplied with closets, library books and cases, dinner shelving, hat and shawl departments and toilet conveniences." As much as could be salvaged of the old schoolhouse was used in the new building.

Maydays, school picnics in the Buttes, sock-hops and two World Wars were memories throughout the lives of the students who attended over the years.

Plans for the third and present Franklin School began in 1949 when bid requests were posted for construction of "four classrooms and a multi-use room" to be built in the Franklin District.

The first new primary wing was built where the school office is now located.  In the years that followed classes were held there, in the cafeteria building, and in the old Methodist Episcopal Franklin Church, (established in 1882). Occasionally students attended classes in the old  multi-purpose room, which was built around 1950, with funds donated by the Franklin Farm Bureau.

Before it was razed in 1958, the old school had been used for classroom overflow, storage, as a civil defense center and as an "Opportunity School" for the learning impaired.

The Kennedy Era brought fences, square dancing and a second primary wing, which was completed in 1962. The new building bordered the space where the old school had been. The "quad" was finished in 1965, and the first kindergarten class ever held at Franklin began that fall.
Over the years additional portable buildings have been installed to accommodate classrooms for the increasing student population, and to provide a library, resource room, and 2 computer labs.  The newest building that was completed in 2008 houses a gymnasium, kitchen and state-of-the-art music room.
Proudly bearing the name of Americas most famous diplomat and patriot, Franklin Elementary School stands today.  Throughout its history, Franklin has remained a standard for education at its best.
Non-Discrimination Policy
Reset Contrast High Contrast A-Z Site Map
Copyright © 2019 Franklin Elementary School District and its licensors. All rights reserved.
Website Developed By CatapultCMS™ & EMS™. | Log In